As a final act as the Canadian Mentoring Partnership (we celebrate our rebrand to MENTOR Canada October 1st), we wanted to take a moment to recognize four special leaders who helped us initiate, grow and establish our initiative.

In lieu of the of the in-person 2020 Canadian Mentoring Symposium and “Power of Mentoring Dinner” where we would have celebrated these awards in person, we invite you to join us online via #powerofmentoring to recognize and celebrate the following four award winners.

The Inukshuk awards found below were handcrafted by Dawn Oman, a self taught First Nations Artist, born in Yellowknife, NT. She is a direct descendant of Chief Snuff of the Yellow Knifes, one of the signers of the original Treaty 8 with the Government of Canada.

The Lifetime Achievement Award given to an individual who has dedicated their life’s work to supporting youth through Canadian mentoring programs. Liz was selected to receive this award because she has dedicated her career to improving the lives of children through expanding and enhancing mentoring programs and relationships at the Local (Edmonton), Provincial (Alberta), National (Canada), and International levels. In 2019, Liz O’Neill was also honoured as a Finalist for the Lifetime Achievement Award by MENTOR "I would like to sincerely thank the Canadian Mentoring Partnership for this beautiful Lifetime Achievement Award.

I have been blessed to have worked with so many inspiring people over the last forty years. Bringing together citizens and community to ensure that our children and youth have caring mentors in their lives to help guide them and to help them achieve their dreams and aspirations.

I have had the privilege to work with community champions such as Marni Pearce at Alberta Education and Dione Kennedy at Alberta Children’s Services along with the Staff of the Alberta Mentoring Partnership and the Staff and Board of Boys and Girls Clubs Big Brothers Big Sisters of Edmonton and Area.

Across this country thousands of caring citizens are involved in this important work and we all continue to work hard to mobilize thousands of additional mentors to be there for our children and youth.

Thank you for this honor."

The Corporate Leadership Award is given to an employee from a company who advocates and mobilizes others to engage in the Canadian mentoring movement.  Ross Anderson was selected to receive this award because of the pivotal role he played in nurturing a relationship between MENTOR Canada, the Canadian Mentoring Partnership, and the Federal government that allowed for the MENTOR Canada to successfully secure funding through Employment and Social Development Canada in 2019. Ross continues to build exciting mentoring initiatives as a key partner with the Black Business Professional Association, Say It Loud, and MENTOR Canada whom together are building a mentorship program dedicated to Black Youth in Canada. 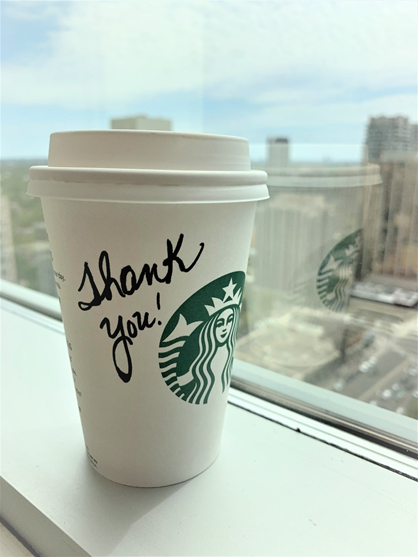 "On behalf of Starbucks Canada, I’m honoured to accept the Corporate Leadership Award from the Canadian Mentorship Partnership. Starbucks believes in creating opportunities for young people in Canada and we believe in the power of mentorship as an important way to invest in someone’s future. Starbucks is proud to work with the Canadian Mentorship Partnership to continue to bring these critical mentoring opportunities to Canadian youth."- Ross Anderson, head, Social Impact & Public Policy, Starbucks Canada

The Impactful Philanthropy Award is given to a foundation, company, or individual philanthropist who has made a significant impact on young people through investment of time and funds in Canadian mentoring programs and/or mentoring initiatives.  BMO was selected to receive this award in recognition of the bold first step BMO took in financially supporting the foundational research, which led to the establishment of the MENTOR Canada and encouraged other corporate, community, and public sector partners to join this growing mentoring movement. This Award is a symbol of the longstanding impact BMO has had, and will continue to have, on the mentoring sector in Canada. The Public Elevation Award is given to an individual who uses their influence and public platform to support mentoring opportunities for Canadian youth.  Minister Patty Hajdu was selected to receive the award as she played a critical role in securing funding support for Mentor Canada during her previous tenure as Minister of Employment, Workforce Development and Labour. While we remain physically distanced due to COVID-19, we hope to gather together soon to celebrate mentoring, recognize visionary leaders, and honor and celebrate the critical role of mentoring relationships in our communities. Through collective impact, we are stewarding greater and more sustainable impact that empowers every young person to fulfil their potential in Canada.